A philosophical inquiry aims at a desideratum. That desideratum is announced or implied in the statement: ‘This is it!’ The ‘this is it’ is the conclusion of the inquiry and the end of the philosophical conversation.

The diagram below seeks to shed some light on this moment of self-knowledge. What distinguishes self-knowledge from other modes of investigation (e.g., scientific investigations) is that it seems to require a dialogic structure. What distinguishes self-knowledge from other intersubjective genres (sharing, chit chat, active listening, validation, etc.) is that it involves inquiring into we know not what in the hope of making some discovery that had hitherto been unknown to both guide and pupil. 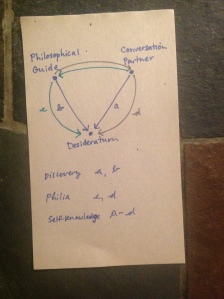 By ‘desideratum,’ in this case I mean some feature of the conversation partner or some aspect of her form of life that had hitherto been unknown. Lines (a) and (b) indicate that both the guide and the conversation partner see that this is the thing desired. It follows from (a) and (b) that both see the same thing. So, discovery (or insight) is of the form: two persons see that something is the case about the person whose life has been ‘put to the question’ and both see the same thing at once about this person.

‘Philia’ I am using to designate a particular kind of relationship–to wit, philosophical friendship. Philia is characterized by a disinterested interest on the part of both in inquiring into something about the person whose life has been brought into question. Both keep the focus of their attention on the ‘this’ and thus exclude the very possibility of thinking about narrow preoccupations.

We can now say that self-knowledge is the whole (a-d) when grasped in the conclusion: discovery (a, b) and philia (c, d). Self-knowledge happens, so to speak, in this flash.