‘The brevity of haiku,’ writes R.H. Blyth in Haiku: Volume III–Summer/Autumn, ‘is not something different from, but a part of the poetical life; it is not only a form of expression but a mode of living more immediately, more closely to life.’ 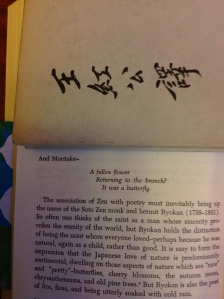 The haiku, as form, uniquely combines concision with precision, enjambs one-pointedness with a dilation of consciousness, turns the changing seasons into piquant quiverings.

My own, less beautiful than Moritake’s, from earlier this morning:

(One would, upon further reflection, have thought it better to have written: ‘by noon, a deck on fire.’) To live more immediately, more closely, more in the way of surprise.