To avoid the existential threat to the human species, the late Stephen Hawking warned, in 2017, that we would need to begin the process of interplanetary colonization. Other, more sanguine prognosticators, not starting from the risk of total annihilation of homo sapiens, have come to a similar conclusion. Mars, they say. Onward and upward.

Not yet is anyone asking, “Are human beings, as they are, really worth it?” Elizabeth Kolbert acknowledges, in her book The Sixth Extinction, that human beings may indeed be a “weedy species” in that we spread out, as those above are indicating, as much as we can while laying waste to other species. On this score, I’m in agreement with Kolbert and her ilk on the left.

Yet their questions remain at the purely Its, or Lower Right, Level as can be seen in Ken Wilber’s oft-cited 2 by 2 below: 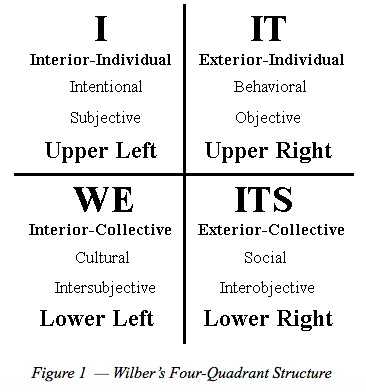 Unlike those posed by Hawking et al. (It Space) and by Kolbert et al. (Its Space), my questions are focused squarely on the I and We Spaces.

Observe that it seems rather pitiable that some human beings have developed superior physical capacities (Adam Ondra, for instance, may very well be the best sport climber and boulderer around), yet those physical capacities are not complemented with comparable mental capacities. Note, further, that intellectuals at universities are, in truth, hyperintellectual and therefore have received no education in the art of dance or in that of oratory, nor do many, given the secular institutions at which they teach and do research, have any genuine spiritual inclinations, let alone deep spiritual practices. Then too Zen roshis are masters of enlightenment, yet, as I’ve suggested in earlier posts, are surely not the ones you would go to when your aim is the “art of the possible”–to wit, politics.

This is troubling, for human beings in general remain unevolved or undeveloped in modernity inasmuch as we are one- and two-dimensional creatures. That is to say, we don’t even have any rigorous and widely accepted anthropologies (what is a human?), let alone any robust cosmologies that including this anthropology. And because we have neither, we therefore lack any widespread training, practice, or education in the cultivation of the whole creature: physically, instinctively, emotionally, volitionally, cognitively, relationally, politically, and spiritually.

It follows, I think, that we’re really not ready, as a species, for interplanetary colonization. It follows, too, that we need to do more than simply “clean up our rooms” and become “responsible individuals,” as Jordan Peterson thinks. We need not just synoptic visions, as John Vervaeke urged in a recent discussion I had with him, but also psychotechnologies of overall self-transformation. We need both.

The Russian mystic Gurdjieff once said that humans are machines; we must become men. Something like this is what I mean. Can we know ourselves and, in turn, can we master ourselves by dint of our integration into the newly understood and amply seen cosmos? The fate of intelligent life may hang on how we answer this question.