Let’s suppose we spend our days exercising many of the virtues. They may include  fidelity, courage, patience, and so on. I am curious how it is that the prominence of one salient vice such as arrogance can throw a person’s demeanor into disharmony and thereby make it impossible for him to become a beautiful soul.

I am especially interested in the vice of arrogance. I have my reasons. To begin with, I was once quite arrogant but now do not believe myself to be. Second, this vice in particular seems to get in the way of an education in disinterestedness, of taking an objective stance toward a world, since it removes the arrogant man from the human fold and sets him well apart and above.

To me, what is striking is the power this vice can wield over the life of the virtues. My fidelity, courage, and patience, perhaps too my kindness toward my beloved, may be overshadowed by my persistent exercise of arrogance. Arrogance ‘pales’ the rest, drawing them into the background, at the same time that it shows itself all the more clearly and forcefully.

And arrogance, most surely, would manifest itself in my demeanor. I would tend to roll my eyes, snort through my nose, squint my eyes, clear my throat. My voice would sound strict and stern and mean. The pace of my walk would be quick, aggressive, the pace of my replies likewise. I would have time for you only if it suited me or only as a minor but significant exception that I make for you. In my engagement with the world, I would think I were a ruler, with every person either overlooked or conquered.

The arrogant man would only lose his arrogance if he experienced tragedy in his life. Introduced to his own human frailty, he would find it impossible to exempt himself from the human fold, as he had done before, and would come to see himself as being ‘of a piece’ with others. If he is lucky, he might then be put on the path of self-transformation, the end of which would be the beautiful soul or, what is the same thing, a life lived in the light of radiance. 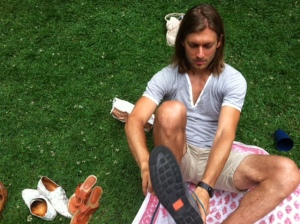 David E. Cooper and I are writing about the notion of the beautiful soul. David argues that the beautiful soul will manifest beauty in his demeanor when the latter has learned to appreciate the beauty of things all around him.

I want to see in this picture a certain meditative gracefulness embodied in the beautiful soul. Here I am putting on a shoe. Perhaps better: here I am merely putting on a shoe. But how am I doing so? There is, in general, a calmness in my demeanor despite the fact that both feet are off the ground. (I have already put on the first shoe and have pulled my left foot off the blanket so as not to soil it. The tautness in my left leg alludes to my left foot being off the ground.)

Notice the softness in the face, the slow breathing through the nose. The forehead, eyes, and cheeks are all soft. One would expect tightness in the face and neck because putting on a shoe, especially when one is in this seated position, can be effortful, strained, clumsy.

Observe the sureness of the hands. Presumably, the right foot is entering the shoe at an odd angle and so the movements, if they are to be effective and graceful, will have to be exact.

Cue, finally, into the active muscles: active but not too active. The chest, arms, shoulders, and belly are working, working in tandem, but not working too hard at their task. The point is that they are coming together nicely.

The beautiful soul, attuned to the beauty of transient things, will perform ordinary activities not with affectation or showiness, not with carelessness, not with exaggerated movements or hyperawareness, not with awkwardness or unsureness, but with naiveté, grace, and ease.