I can remember the presentations that guest speakers used to give to us second- and third-graders. The subject was the distinction between “good” and “bad” touches. By my recollection, there would have been red slashes over pictures of “inappropriate” touches–a man’s hand, say, en route to a young woman’s crotch–and circles around “good” touches like hugging and hands on shoulders.

Both terms, it turns out, were ill-freighted and misconceived, “bad” having been larded up with “illegal,” “harmful,” and “wrong”; “good” identified exclusively with certain kinds of behavior. Yet, understood only as kinds of behavior, a hug, a kiss, a fuck needn’t be good touches at all–any hug can be nasty or diaphragm-sucking–whereas a hand on the crotch may be just the thing.

I think we don’t help ourselves in the least by linking touching to sex, good, bad or indifferent, not because sex doesn’t involve touching but because it is only one kind of touch and not the commonest kind at that. Someone may not want sex per se; she may want to be touched with gentleness and gentle knowing. In which case, we do far better to say, more phenomenologically, that “to touch and be touched (well) is to exist.” Touching is being finite beings, being at home in our own skin.

Last week was a heavy week for me. I heard about a man who hadn’t been touched by his wife in three decades and who didn’t know how to touch or be touched by his daughter. I heard from a woman living, for a few months, like a hermit, a woman in want of human touch. I talked to another who longed for genuine propinquity. I met a man of a former wife at a get-together and thought he lacked élan. Ubi sunt: where had all the graceful touching gone?

I remember reading Paule Marshall’s novel, Soul Clap Hands and Sing, in school. In one of the final scenes, an old black woman, a Brooklyn transplant if I recall, has returned to the Caribbean island where she was born and allows herself to be touched with hands and bathed in oil by an even older woman. She cries.

Imagine someone who has never been touched. Does this person exist? I think of the voiceless woman of In the Heart of the Country who is existentially alone, without words, dried out, untouched by the fullness of being. Imagine someone who has only ever been touched poorly, touched in the wrong way by the wrong persons with the wrong intentions. This woman would exist but only barely and may muse about the deliciousness of not-existing. (If we stroke her hair just so, then surely she will come back to us.)

If to be is to touch and be touched well, then touching cannot simply be a behavior (nix all the sex ed health talk, therefore) but must be an ethical art. In compassion, I touch you with learned grace. My kindness is felt in your slackening shoulders. Our warmth radiates, reviving, enlivening, enveloping. Our skin is flush, pink-hued, gold-tipped. 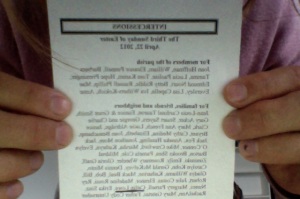