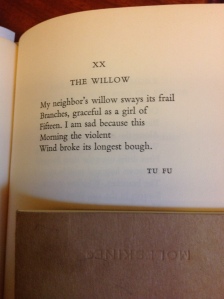 A Poem About Radiance

‘It is obvious,’ replies the first pupil. ‘It is, as Tu Fu says: the longest bough has been broken.’ A second pupil differs: ‘The world is unjust: the violent and strong will always crack and break the weak and frail. Had we not better stay in the hermitage and meditate?’ A third believes he sees the light: ‘Do not you see? Because everything, including the willow tree, is impermanent.’

END_OF_DOCUMENT_TOKEN_TO_BE_REPLACED

I said, I am looking at a photograph. In the photo, there are green meadows and there is the silhouette of a tree draped across the summer grass. In my fingers which are stained with chalk, I am holding a clementine. I hold it up roundly, delicately, offering it to you. We are not looking at the same full moon together, I said. We are looking at the same world, orange and whole. I did not say aloud until later that evening: a world as beautiful as the beautiful world can be.

This time my Compaq shut down for good. I was about to say hello when all went dark and pixely–all except the well-lit room and the glistening night and the buildings mocking my pixels.

My childhood dog had grown glistening eyes and vacant ribs in the years before he died. He died in his sleep when I was gone, the sleep having been induced. I came back to him and saw him in the black bag, but the damp body meant nothing to me. The grief was all in the body, mine, the grief still to come.

For over a decade, I had been in the habit of opening the back door for him. I would let him in first and then go in behind him. It was one of those spring-loaded doors that required strength and patience and twisting. With Butterscotch, I had learned to be awkward and effective. I would open the door, round out my back, and let him hunker past. The benefit of this maneuver was that I wouldn’t have to pull open the door and walk back a few steps in order to let him in. Instead, I could stand close to the door, like the dolt I was, and let him saunter by. Then I would file in right after, the door following my follow.

The grief was all in the habits of my body, all fingers and spine and knees. For in the weeks and months after the black bag, I would open the door and pause, my body rounded out. Nothing would pass by, no yellow- and white-haired mutt would scrounge past, nothing grimy would slough through, no spiny body with bony shoulders and withered hips, no living vertebra slide past me.

I remember grief-stricken Antigone whose brother had died alongside his brother, against his brother in war. One was honored, the other condemned to rot, sun-parched, vulture-picked, god-damned. Defying Creon’s order that he shall go unburied, obeying the higher order of the gods, Antigone went to her brother and threw dirt over his dead body and wept.

I imagine Sicilian women wearing dark dresses and moaning and throwing ashen dirt and bellowing. I envision old men and young boys mumbling and chanting and spitting like madmen from sunrise to twilight, spitting words and rocking sounds till the moment when day breaks. I recall an early scene from Gilead when the preacher and the preacher’s son head foot-bound from Iowa to Kansas to properly bury their preacher kin: the father of the father, the grandfather of the son. The son, near death, near 80, is himself a preacher writing to his 7-year-old son.

But not we, oh secular sons, not we oh hardheaded daughters. For we secular sons and hardheaded daughters have no religion but pleasure, no binding rituals but sport. We do not heave dirt or ourselves. We do not lie on the ground and moan and bleat and yip. The dead succumb to withering, modern technology throwing up its silver hands, the dead brought to incinerate off-stage. It is appropriate in our age, in an age without religion, that the dead should be blasted in the dark by hot fire, should be destroyed by a blazing stove, should be stored in a sealed jar, then spread somewhere in a fashion cooly reminiscent of Successories inspirations: a golf course, a gulf coast, a dock beside the bay, a supermarket aisle.

(The horror of More’s Utopia: the cemetery beyond the city, the dead beyond the wheat fields.)

We need not grieve the dead because the dead had, during their too long spell on earth, frittered away their lives. They did not deign to speak to death, did not care to face it, to face its ashen face, because they… well, because they had rather not do that, do anything like that, do anything so unpleasant as all that. If their lives had no meaning, then neither did their deaths. There’s harmony, yet none so poetic, in this.

But, listen now, a stray word amid the diurnal ruckus. It goes, chiastically, thus:

A philosophy of life is, at its very first moment, a meditatio on death–on skulls, on corpses, on Dickinson, the abyss, despair. And only then, like a rolling turn toward the rolling earth, can it possibly be justified in sounding a goddamn hunger hymn for living well. For only then will true death, this singular awful dearth, the one that always kindly drops by oh just a bit too early, be worthy of our reverence, some blessed communal rituals, our horribly bellowing women, these manly bowing shoulders, our screaming children’s voices.

She told me to select a ripe mango. She sent me salt the color of lavender, the hint of Moab, the feel of fine sand. She told me to cut the mango into thin slices, told me that as I approached the seed I would feel “fibrous resistance,” told me to dip the sinewy pieces of flesh into the patina of lavender madness, “savoring,” she said, “on the lips and tongue and teeth.”

The first time was too early; the second, occurring yesterday, was not. She said,

The first bite may be shocking. The black salt shows you where the mango might go if it gets too ripe, too wild, if left too long to its own. But it hasn’t, it isn’t, not yet: the mango is just ripe enough, the black salt is only a reminder.

I tell you it was.