My wife Alexandra Dawn Taggart will be exhibiting at freSH Gallery in Santa Fe, New Mexico, from June 8th-June 25th, 2017. “Crossroads: A Sanctuary for Spirituality” is a group exhibition that seeks to embrace religious and spiritual diversity by presenting visual artwork that’s born from an artist’s spiritual practice. The exhibition is hosted by Miri Piri Academy, a private boarding school that was founded by Yogi Bhajan in 1997. Located in Amritsar, Punjab, India, the school is geared toward instructing children and young adults on the importance of Sikh and Khalsa values, kundalini yoga, and academic excellence. 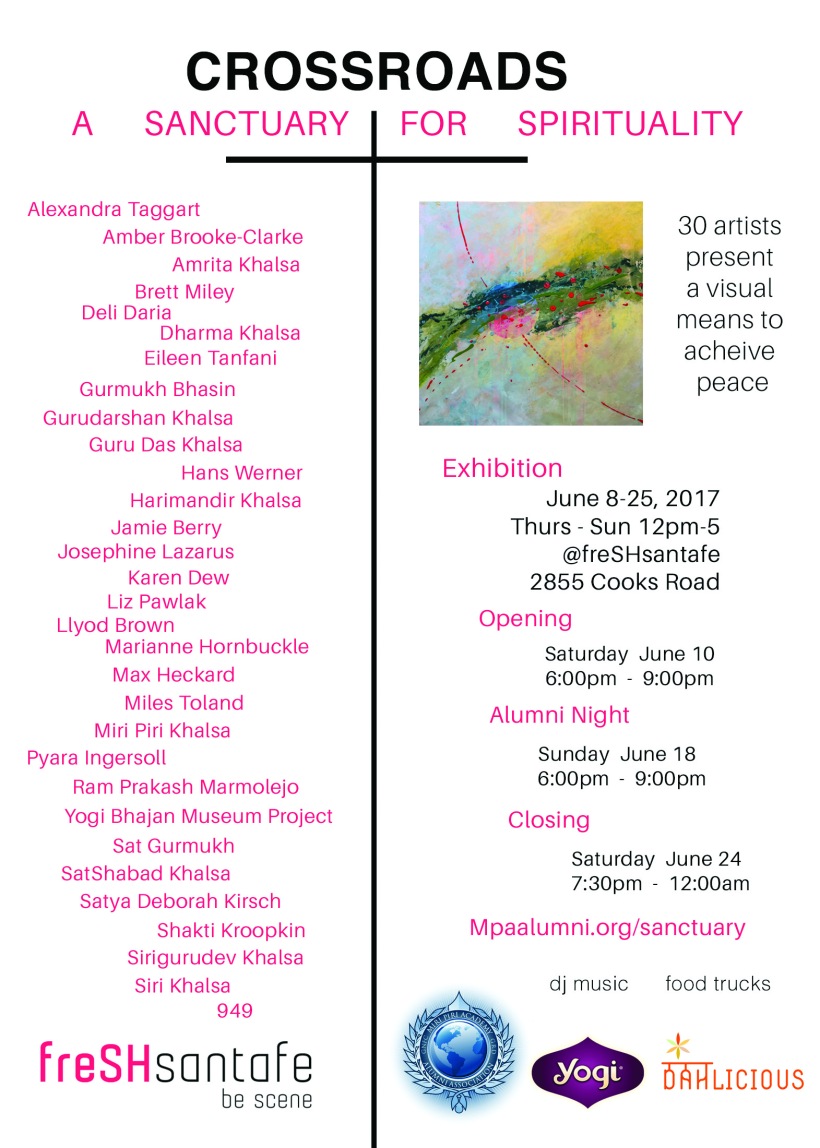 Zen Buddhist teacher Katsuki Sekida has been a source of great inspiration for me, most poignantly when he writes about “see[ing] things as they truly are.” According to Sekida, what we see is shaped by our mood, the latter serving as the “keynote” or central theme of our existence. Human beings, he asserts, live in their mood for as long as they live. Mood, a result of embodiment, moves beyond the workings of our physical body and the mental activity of the brain as we “mind” or relate to our environment. Sekida thinks that the life of a child is defined rather simply by “two different worlds of mood, one warm, the other cold; one soft, the other hard.” These worlds multiply, become vaster as we move with an increasingly deluded consciousness into adulthood. If I understand Sekida rightly, our deluded consciousness, which develops as we mature, springs from an intellectual awareness of oppositions and discriminations. This kind of intellectual awareness separates our existence from that of other existing things. Desert hills and stars and planets, all of which pass beyond and above, are mere recipients of our conceptual understanding. We are now, as Sekida puts it in an allusion to Heidegger, “being-in-the-world”, which detrimentally alters the mood of existence. What happens to an adult upon their “being-in-the-world?” Sekida’s answer: “vividness of sense and mood has died out, replaced by a conceptual way of thinking. [They are] an intellectual being and [have] killed the precious sense and mood of childhood.” We needn’t despair about his disquieting statement because Sekida reminds us that the mood of a child has never been lost since it’s “preserved” within us. In this mixed media piece, I seek to portray such a preservation of mood. The wandering figure–curious, awe-struck, and open– finds the purified wisdom of his flexible mind, thereby seeings things as they truly are.

“We are saved in the end by the things that ignore us.” In his book The Solace of Fierce Landscapes: Exploring Desert and Mountain Spirituality, Belden C. Lane is quoting Andrew Harvey. What inspires Lane is the sense that what ignores him most is the fierce desert landscape where he’s been hiking, climbing, camping, and musing. The desert, he observes, is indifferent to our beliefs, to our needs, ideas, and desires. I experienced something like this, something like the desert’s stoical nature, while living in Joshua Tree, California. It’s difficult to maintain that you’re an important person when there isn’t a soul with whom you can compare yourself or who can think well of you. It’s challenging, not to say foolhardy, to be vain and preoccupied with your appearance when there’s no one there to look at you. Does this jagged desert landscape care whether I have an impressive resume or naturally curly hair? Do these rock-encrusted mountains folding and stretching and yawning in the distance take note of whether I’ve worn make-up today or will shower tomorrow? For now, for the first time, I’m a lizard, a praying mantis, a bud on a fragrant creosote bush: I’m knee-high to a grasshopper, unseen and obscure. As the moon rises, I watch the darkening clouds ignore me, opaquing, thus making room for a primordial take on this the golden world.